After a rare Capitol Hill visit to pitch lawmakers, Joe Biden claimed that Democrats would approve his ambitious domestic spending agenda despite internal party bickering that has stalled its passage through Congress, declaring “we're going to get this done.”

Biden's party is divided over the two pillars of his sweeping legislative agenda, on which he has staked his presidency: a $1.2 trillion infrastructure bill with bipartisan support and a $3.5 trillion spending package to strengthen America's social safety net, which Republicans oppose and will need to pass both chambers of Congress with Democratic votes alone.

Nancy Pelosi, the Democratic Speaker of the House, was supposed to bring the infrastructure bill up for a vote this week, but she has repeatedly pushed back a self-imposed deadline due to disagreements over whether it should be linked to the broader package's passing.

Biden tried to ease deadline demands after a 45-minute closed-door discussion with Pelosi and House Democrats on Friday, rejecting any indication of a tight schedule for adopting the package. 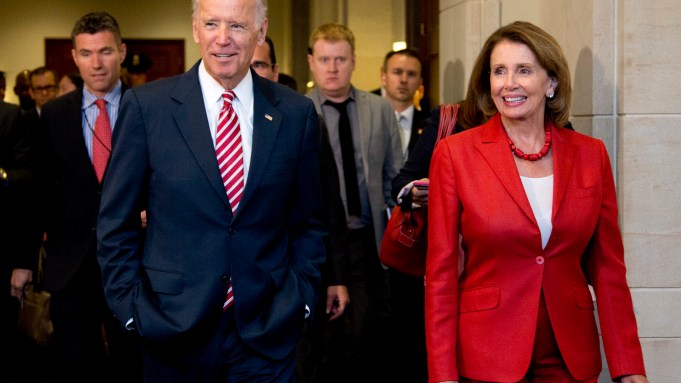 Members of Congress were instructed to turn in their phones before entering the secret meeting, but members afterwards stated that Biden had conceded that the $3.5 trillion measure would need to be scaled back in order to clear the Senate.

The driving forces behind the smaller package are two of the most conservative Democrats in the Senate, Joe Manchin and Kyrsten Sinema, who wield enormous weight in an upper chamber split 50-50 between Democrats and Republicans, with Vice President Kamala Harris able to cast the deciding vote.

Manchin, who represents West Virginia, stated on Thursday that he would not back a budget bill costing more over $1.5 trillion, while a Sinema spokesperson stated that the senator from Arizona also opposed to the $3.5 trillion package's cost.

Members of Congress said the president publicly admitted on Friday that the bipartisan infrastructure bill would not pass the House unless the budget measures were also agreed upon.