The numbers of public- and private-sector employees were at or above February 2020 levels, while self-employment remained 8.4% (-241,000) below its pre-pandemic level. Employment in the services-producing sector surpassed its pre-COVID level in September, while employment in the goods-producing sector remained 3.2% (-128,000) below its February 2020 level. Total hours worked were up 1.1%, but were 1.5% below their pre-pandemic level. The number of people working from home was 4.1 million in September, down from 5.1 million in April 2020. 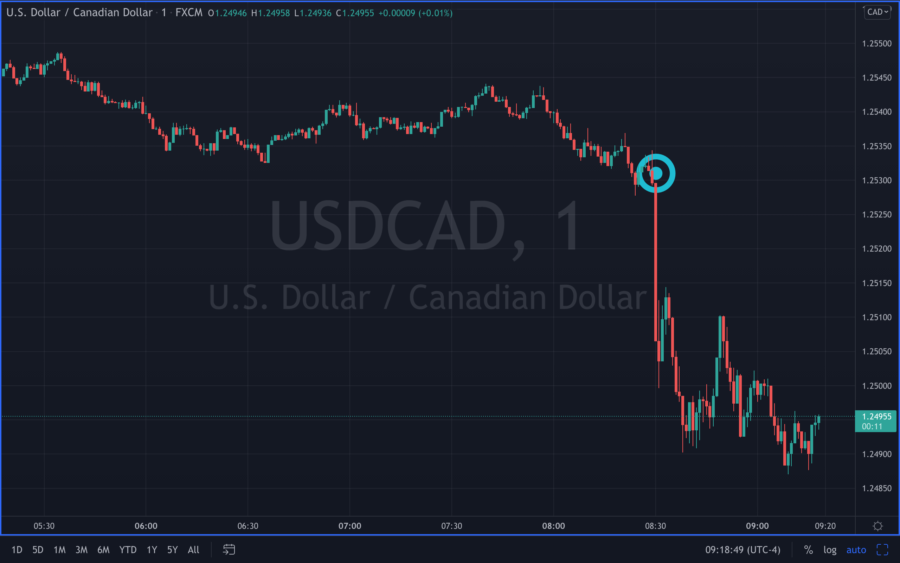 Canadian Unemployment Rate - The unemployment rate measures the number of unemployed as a percentage of the labor force. In order to be counted as unemployed, one must be actively looking for work. It is a lagging indicator, meaning that it generally rises or falls in the wake of changing economic conditions, rather than anticipating them.

Canadian Employment Change - In Canada, employment change refers to the change in the number of persons who work for pay or profit, or perform unpaid family work. Estimates include both full-time and part-time employment. Employment trends and break-downs by industry groups highlight the strength in job creation and the implications for future sectoral activity.

Canadian Participation Rate - The participation rate is an important indicator of the supply of labor. It measures the share of the working-age population either working or ready and able for work.

The unemployment rate is important as a gauge of joblessness. For this reason, it's also a gauge of the economy's growth rate. Therefore investors can ascertain the health of the economy and the direction it may be going in the near future. Investors also use current unemployment statistics to look at which sectors are losing jobs faster. They can then determine which sector-specific mutual funds to sell.

STOCKS - Little or no growth in employment is seen as bad for stocks, the worry is households will be less inclined to shop. The weaker sales can shrink corporate profits.

CURRENCY - A weaker jobs report softens demand for the Canadian dollar because it will be bad for Canadian stocks. This makes the CAD less appealing to foreigners.

BONDS - A series of weak employment reports reflects a more sluggish economy, which is bullish for bond prices and means interest rates will head lower.