In September, the IPPI increased 1.0% after decreasing 0.3% the previous month. Of the 21 major commodity groups, 14 were up, 5 were down, and 2 were unchanged.

The RMPI increased 2.5% in September after decreasing 3.1% in August. Of the six major commodity groups, two were up and four were down.

Crude energy products were the main source of the RMPI's growth in September, with prices rising 7.2%, after decreasing 5.8% the previous month. This gain was mainly due to higher prices for conventional crude oil (+7.3%) and synthetic crude oil (+6.3%). Natural gas prices (+6.7%) also contributed to the increase, but to a lesser extent. The oil market was driven upward by several factors, including increased global demand for oil, the ongoing production limits by the Organization of the Petroleum Exporting Countries Plus (OPEC+), and the slow recovery of production on the US Gulf Coast after Hurricane Ida moved through the area in late August. 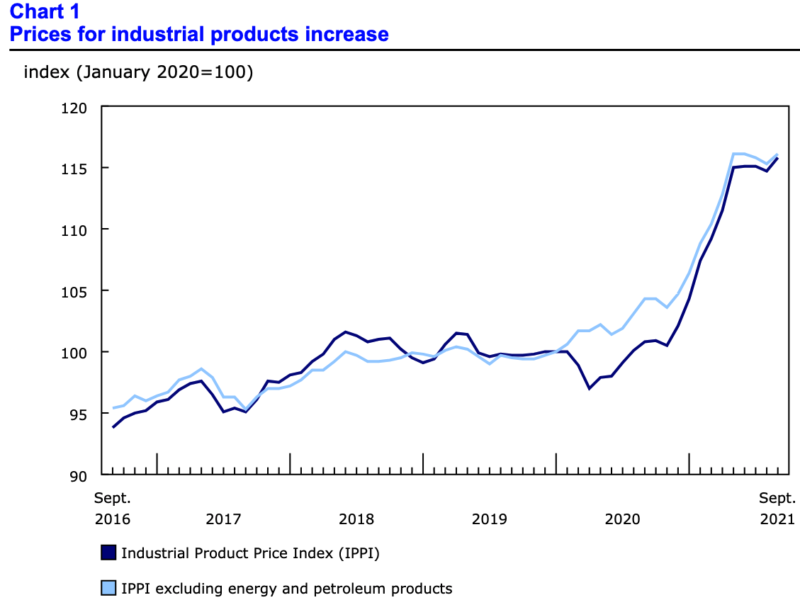 The CA IPPI index measures the movement in prices for manufactured goods produced in Canada, destined for domestic or export consumption.

The Raw Materials Price Index (RMPI) provides the movement in prices for a group of major input products into goods produced in Canada. It helps cover the spectrum of price changes in the Canadian economy and is valuable directly and in relation to the price movements of products derived in part from these materials. In addition, the RMPI series supports the Canadian System of National Accounts (SNA), where it is used in the calculation of real Gross Domestic Product (GDP).