Total exports increased 0.8% in August to $54.4 billion, a third consecutive monthly gain. Exports were up in 6 of 11 product sections with energy products rising the most. Non-energy exports edged down 0.4%. In real (or volume) terms, total exports rose 2.3%. 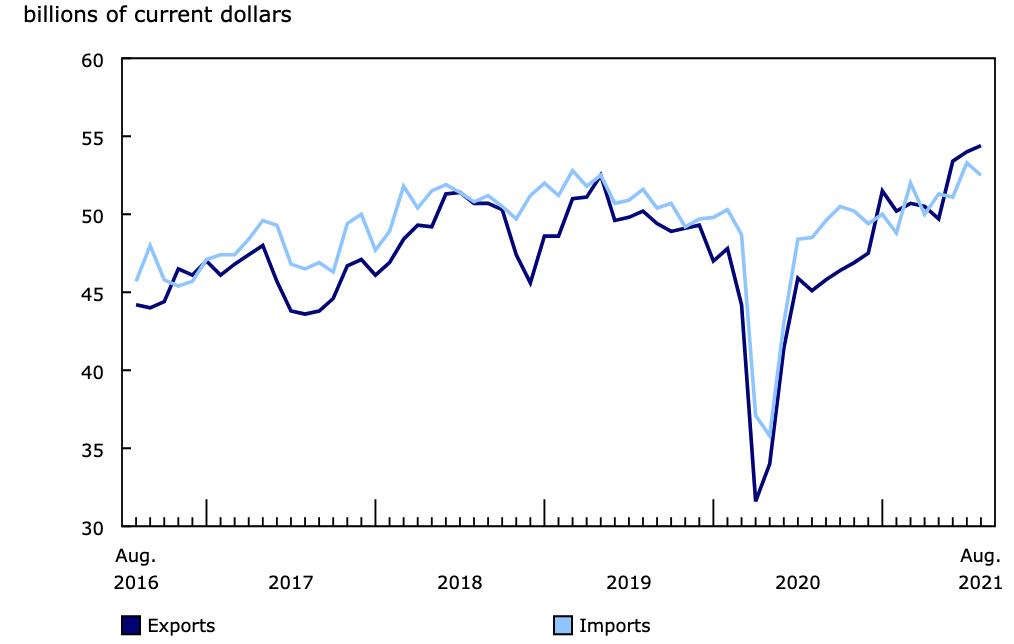 A monthly report on Canadian exports and imports of goods and services. The Canadian trade balance is the difference between Canada's exports and the value of its imports for a given period.

Economists use the trade balance to measure the relative strength of a country's economy. A trade surplus or deficit is not always a viable indicator of an economy's health, and it must be considered in the context of the business cycle and other economic indicators. For example, in a recession, countries prefer to export more to create jobs and demand in the economy. In times of economic expansion, countries prefer to import more to promote price competition, which limits inflation.

CURRENCY - An improvement on the Trade Balance is typically viewed as favourably to the dollar. The more goods and services foreigners buy from Canada the more Canadian dollar they’ll need to buy to pay for Canadian products. However, flooding the market with even more CAD could weaken the CAD.

STOCKS - If the export growth is strong enough to heighten fears of inflation, it could displease stock investors because the interest rates could edge higher. However, typically stocks fare well in improved trade balance because it means that there is an increase in overseas sales.

BONDS - Don’t just look at the headline figures but focus on what’s going on behind the scenes, if the trade balance improves bond investors prefer the reason to be a fall in imports rather than the exports. If the deficit climbs, traders might hope the cause is a plunge in exports, which would at least ease economic output.