After seasonal adjustments, the Eurozone PMI Composite Output Index decreased from 59.0 to 56.2 in September, reaching the lowest level since April. Despite indicating a solid expansion in business activity, it showed a significant deceleration from the expansions seen between June and August.

Services activity grew quicker than manufacturing production for the first time since the COVID-19 pandemic began in early 2020, showing the latter's susceptibility to ongoing supply-related concerns. However, growth rate slowed in both sectors MoM. 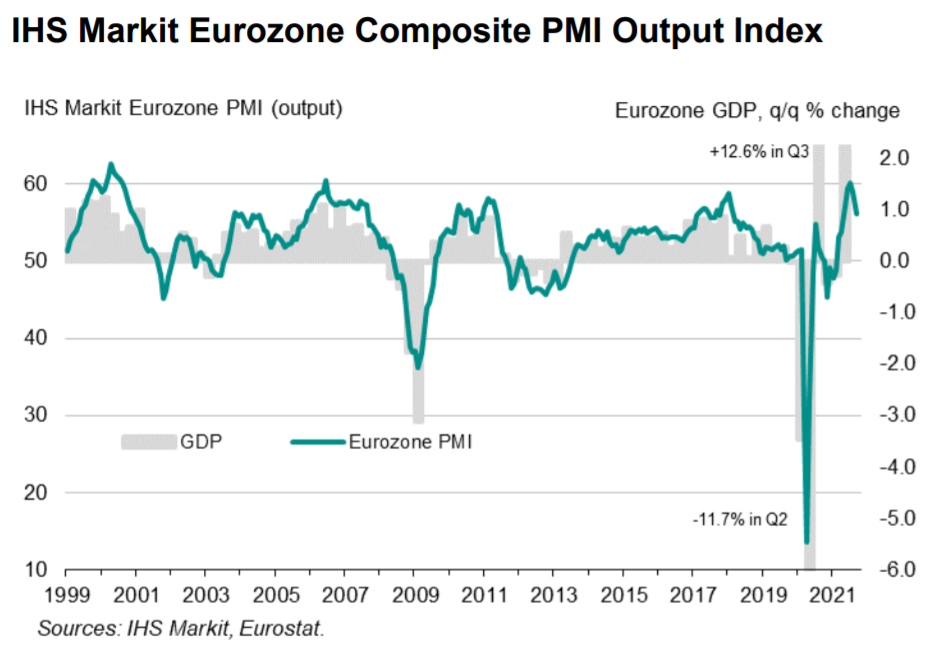 Ireland recorded the quickest expansion of the economies monitored, whereas France and Germany endured the softest expansions.

Demand for euro area goods and services increased for the 7th consecutive month, though the expansion rate eased to a 5-month low. The slowdown was broad-based and more pronounced at manufacturers. However, goods producers outperformed service providers in sales, partly owing to solid export demand. In the service sector, international sales increased only slightly.

Employment growth rose at a strong pace, despite easing slightly from August. This trend was evident in all monitored member countries, with Ireland experiencing the highest growth. However, there was evidence of capacity constraints, as work backlogs across the eurozone increased sharply and for the 7th consecutive month.

Despite a drop in optimism to its lowest level since February, businesses maintained an elevated level of confidence in the 12-month outlook.

Inflation rates rebounded, as input costs climbed at the equal fastest rate on record (since July 1998). The quicker total rise in input costs was driven by service firms, despite selling prices accelerating in both sectors.

The Eurozone PMI Services Business Activity Index fell to 56.4 in September, down from 59.0 in August.

Demand for euro area services climbed for the 5th consecutive month, but at the slowest rate witnessed during this period. Following rather robust improvements in the prior 3 months, new business from overseas increased only slightly.

Firms continued to hire at a quick pace, though the employment growth rate fell to a 4-month low.

Service providers remained confident that activity levels would rise in the coming year as global economies recover from COVID-19, although optimism slipped to a 6-month low.

Both input costs and selling charges endured increasing inflationary pressures. The former increased at the fastest rate since mid-2008, while output price inflation remained among the highest in over 20 years.