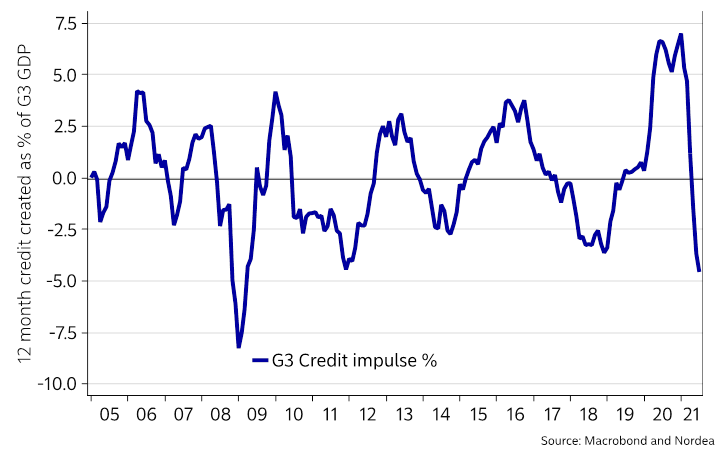 The annual change in the flow of credit to enterprises and consumers (reported as a percent of G3 GDP) rather than the annual growth rate in the credit stock is used to calculate the G3 credit impulse.

Previously, a drop in the credit impulse has been followed by a general slump in the economy. However, the recent drop appears to be a return to normal lending conditions following extraordinary circumstances in 2020.

Policymakers aided the private sector by increasing asset purchases, allowing commercial banks greater access to central bank funds, and providing state-backed loan guarantees. When the Covid-19 pandemic broke out, the combination of these countries'(G3) contributions made a difference.

The credit impulse has begun, as enterprises no longer require the liquidity facilities that were used in 2Q 2020 and 3Q 2020.

As the private sector reopens, policy support and borrowing flows in the United States can begin to reduce without jeopardising the recovery.

The recent decline in China's credit impulse, on the other hand, appears to indicate a genuine downturn in the economy.

The Chinese government is most likely to respond with policy measures that will see credit growth resume before the end of the year.