In October, the French business climate remained stable MoM, with the sector's composite indicator at 107, staying above the average of 100. The balances of opinions on order books improved, while those on production, whether past or expected, slightly decreased.

The balance on the overall order books rebounded, following decreases in the previous 2 months, remaining above its long term average. The balance on foreign order books increased slightly. Furthermore, more manufacturers than last month considered their finished-goods inventories as lower than the seasonal typical. 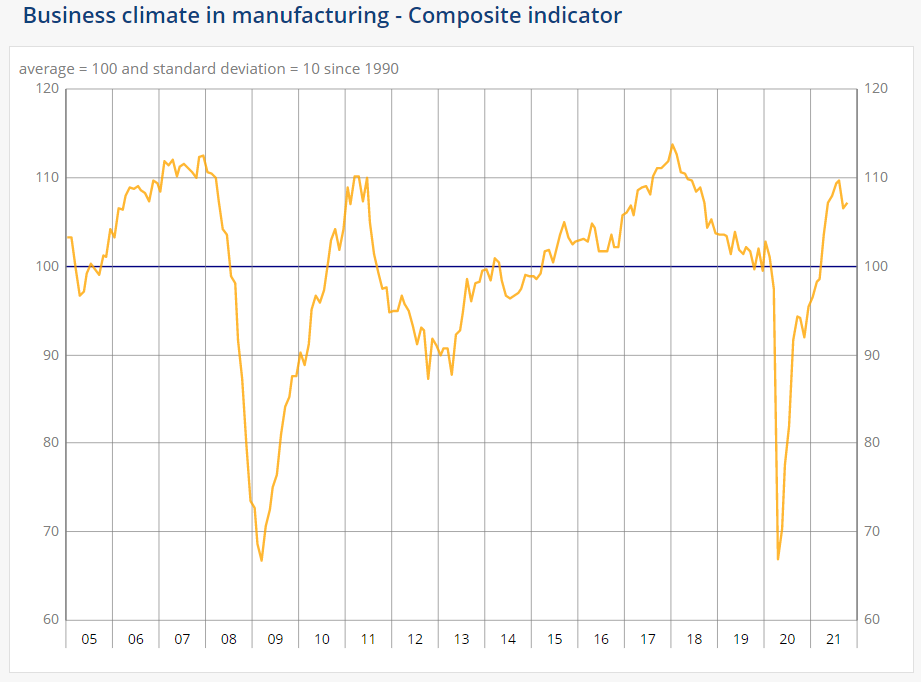 Manufacturers' tempered their personal production prospects, with the relative balance decreasing for the 2nd consecutive month. The manufacturers' view of their previous production dipped slightly. These two balances continued to be above their averages.

The opinion balance on the industry's general production outlook decreased marginally, though remained significantly above its average. As for the degree of economic uncertainty felt, it has been virtually stable since June 2021.

The balance on the general level of industrial output prices during the next 3 months remained stable, substantially above its average.

The business climate in the manufacture of transportation equipment improved, reaching 92, though this remained below its average of 100. "Other transport equipment" recovered with the balance on order books, after numerous months of deterioration for the climate. The automotive industry remained steady, and above its average.

The business climate for the manufacturing of food products increased slightly, staying above its average, mainly due to the balance on order books.

The machinery and equipment goods business climate was stable and at a high level, with the balance on production rising sharply over the last 3 months.

Only the climate of  "other industries" weakened slightly, while remaining well above its average, due to decrease in the balances on past and expected production. However, the climate in the sub-branch of "manufacture of basic metals and fabricated metal products" has been improving.