The headline Flash Germany PMI Composite Output Index showed a further loss of growth momentum in October, falling from 55.5 in September to an 8-month low of 52.0. The index has decreased every month since reaching a record high in July.

The Manufacturing Output Index fell to a 16-month low of 51.1, whereas the service sector's Business Activity Index fell for the 3rd consecutive month to 52.4, reaching its lowest level since the current period of growth began in May.

The latest data indicated an increase in inflationary pressures across the German private sector, with quicker increases in both input costs and output charges. 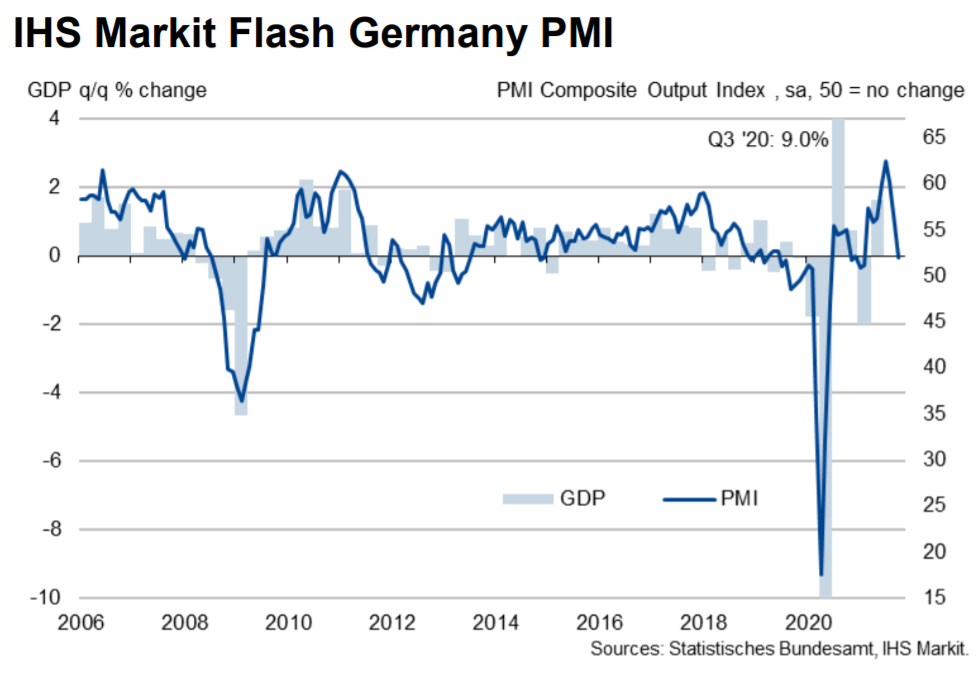 Firms' input costs increased at the 2nd-fastest rate in the survey's history, after only June. Both monitored sectors experienced accelerated rates of growth, with manufacturing's cost burdens continuing to rise faster. Surveyed firms commented on rising raw material prices (typically metals and plastics) as well as rising energy costs. The service sector was also affected, with overall operating expenses increasing at the quickest rate on record.

The rate of inflation in average charges for goods and services was the quickest since the series began in September 2002, with output prices in both monitored industries increasing at an unprecedented rate.

Employment in Germany's private sector continued to increase strongly at the start of Q4, with the rate of job creation accelerating slightly from the previous month.

Business expectations for future activity improved slightly, remaining above the historical average, but still the 2nd-lowest in the year-to-date. The service sector was responsible for the increase in confidence. Manufacturers' optimism, on the other hand, has continued to decline, reaching its lowest level since July last year.