In September, the seasonally adjusted Germany Services PMI Business Activity Index was 56.2, a significant decrease from 60.8 in August and the lowest overall since May.

Transport & Storage was the largest hinderance on activity, owing in part to a manufacturing slowdown.

At the end of Q3, new business growth rate slowed for the 2nd consecutive month to the slowest since May.

Backlogs of work in the service sector increased significantly in September, due to insufficient staffing capacity and material shortages. However, the growth rate slowed to a 4-month low. 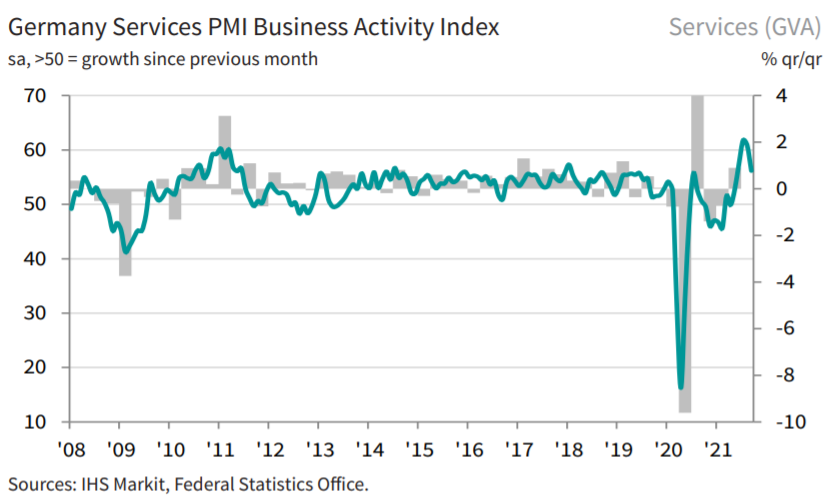 German service firms continued to hire at the end of Q3 as they sought to expand capacity, extending the sector's current sequence of net job growth to 15 months. However, the rate of job creation slowed to the slowest since May, as some firms found difficulty with finding staff.

The slowdown in hiring also coincided with a decrease in employers' optimism about growth prospects in the coming year, with expectations reaching the lowest level since April. Supply bottlenecks and increased pricing countered some of the positive emotion regarding hopes of the pandemic's end.

The seasonally adjusted Germany Composite PMI Output Index declined from 60.0 to 55.5 in September, the lowest since February, indicating a slower pace of recovery in the private sector economy.

At the close of Q3, both manufacturing and services exhibited momentum decreases.

The average cost of goods and services increased to a near record rate. Manufacturing output price inflation was significantly greater than in services, reflecting substantially harsher cost pressures in the former.

Firms' growth forecasts moderated for the 3rd consecutive month, to the lowest level in 2021 so far.