October PMI data from IHS Markit signaled a steep improvement in operating conditions across the U.S. manufacturing sector. Although the overall upturn slowed to the softest in 2021 so far,
the expansion in new orders remained sharp and historically elevated. Nonetheless, output growth eased again to the weakest since July 2020 amid capacity constraints including material shortages. A lack of input availability and transportation delays led to a severe deterioration in vendor performance, with input costs rising markedly. At the same time, firms passed through higher input prices to their clients, as charges rose at the fastest pace on record. Meanwhile, concerns regarding supply chain disruption and inflation weighed on business confidence which dropped to the weakest for a year.

The seasonally adjusted IHS Markit U.S. Manufacturing Purchasing Managers’ Index (PMI) posted 58.4 in October, down from 60.7 in September and below the earlier released 'flash' estimate of 59.2. The latest improvement in the health of the U.S. manufacturing sector was sharp, despite being the weakest for ten months.

Contributing to the overall upturn was a steep rise in new business at manufacturing firms in October. Companies continued to highlight strong demand conditions, but some noted that raw material shortages were hampering demand from clients as stocks of inputs had already been built or delivery times were too extensive. The pace of new order growth was the slowest for ten months. New export sales rose only fractionally as foreign demand was also weighed down by the knock-on effects of uncertain supply. 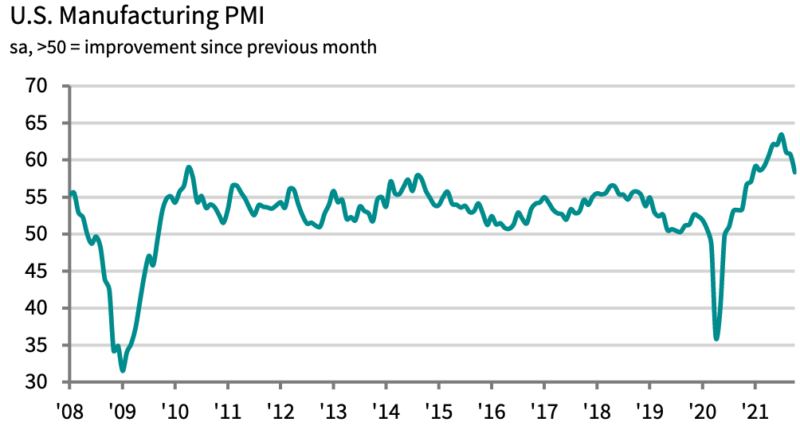