The U.S. consumer price index for May was released earlier today (10/06/2021). The forecast was for the CPI to rise 4.7% from a year earlier however the figure came out to be higher at 5%. That’s a bigger jump than expected, up from 4.2% in April, and will fuel concerns that inflationary pressures are building in America as the economy rebounds strongly from the pandemic.

The Core CPI also jumped again in May, by 3.8% year-over-year, more than the expected 3.5%. By this measure, inflation looks to be accelerating. 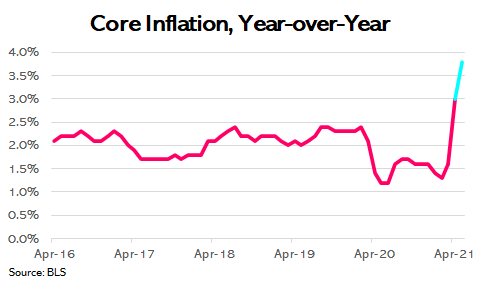 The immediate reaction to the CPI data release were as follows:

The number of Americans applying for unemployment benefits fell for the sixth straight week as the U.S. economy reopens rapidly after being held back for months by the coronavirus pandemic. The Labor Department reported today (10/06/2021) that jobless claims fell by 9,000 to 376,000 from 385,000 the week before.  The number of people signing up for benefits exceeded 900,000 in early January and has fallen more or less steadily ever since. Still, claims are high by historic standards. Before the pandemic brought economic activity to a near-standstill in March 2020, weekly applications were regularly coming in below 220,000.