The U.S. current-account deficit, which reflects the combined balances on trade in goods and services and income flows between U.S. residents and residents of other countries, widened by $16.5 billion, or 8.3%, to $214.8 billion in the third quarter of 2021, according to statistics released today by the U.S. Bureau of Economic Analysis (BEA). The revised second-quarter deficit was $198.3 billion.

The third-quarter deficit was 3.7% of current-dollar gross domestic product, up from 3.5% in the second quarter.

The $16.5 billion widening of the current-account deficit in the third quarter reflected a reduced surplus on services and expanded deficits on secondary income and on goods that were partly offset by an expanded surplus on primary income. 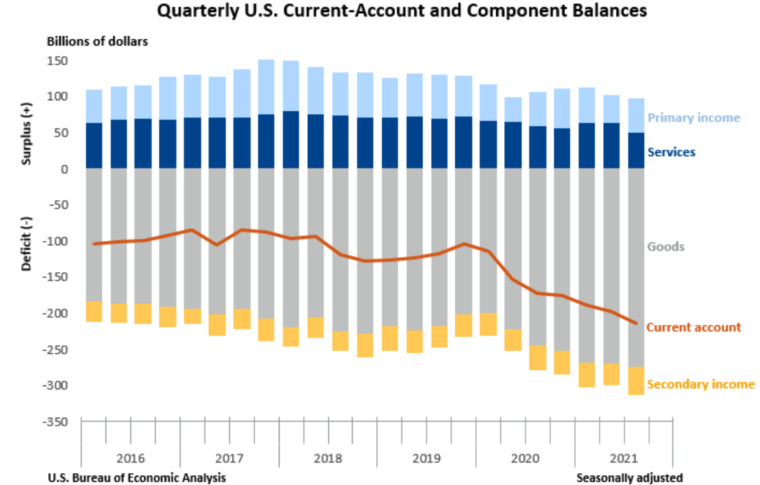 Measures the United States' international trade balance in goods, services, and unilateral transfers on a quarterly basis. Readings in this report track trends in cross-border trade.

CURRENCY - Data can directly impact all the financial markets, but especially the foreign exchange value of the dollar. Trade imbalance creates a greater demand for foreign currencies.

BONDS - The bond market is very sensitive to the risk of importing inflation or deflation. A higher deficit suggests consumers and businesses are outspending their income.