December PMI data from IHS Markit indicated a further subdued turn in production across the US manufacturing sector. With the exception of October and November, the pace of output growth was the slowest since October 2020. At the same time, companies recorded the softest rise in new orders for a year and a further substantial deterioration in vendor performance amid severe material shortages. Longer lead times for inputs also led to another sharp increase in backlogs of work, albeit the slowest for ten months.

Meanwhile, cost burdens continued to increase markedly despite the rate of inflation softening to the slowest since June. Efforts to pass-through greater costs to clients were hampered by softer demand conditions, as charges rose at the slowest rate since April.

The seasonally adjusted IHS Markit US Manufacturing PurchasingManagers’ Index (PMI) posted 57.7 in December, down from58.3 in November but broadly in line with the earlier released 'flash' estimate of 57.8. The improvement in the health of the US manufacturing sector was the slowest in 2021 amid subdued output and new order growth. Ongoing efforts to build safety stocks and a severe deterioration in vendor performance, ordinarily signs of improving conditions, continued to lift the headline PMI, however. The rate of output growth picked up slightly to the fastest for three months but was much slower than those seen earlier in the year. Manufacturers noted further constraints on production due to severe material shortages and input delivery delays. 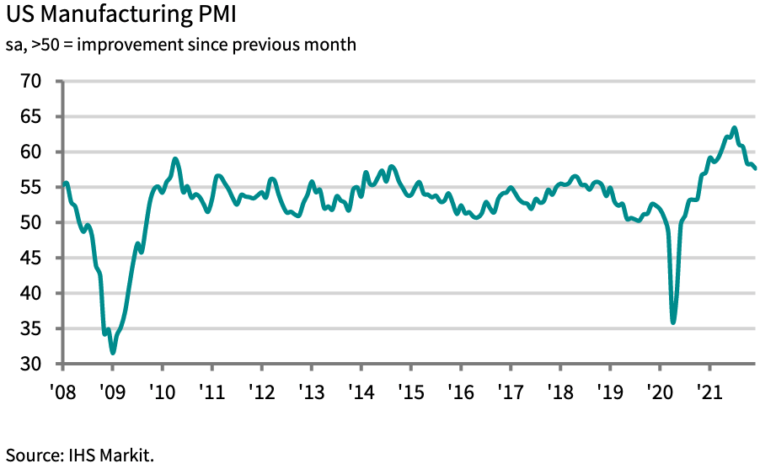 Following the release, the S&P500 saw some movement towards the downside.