In October, German investor confidence fell for the fifth month in a row, adding to evidence that global supply constraints and rising inflation are weighing on Europe's largest economy's recovery.

Expectations at the ZEW institute decreased to 22.3 from 26.5 the previous month, the lowest level since coronavirus lockdowns began last year. The Eurozone's outlook, as well as measurements of actual conditions, deteriorated. 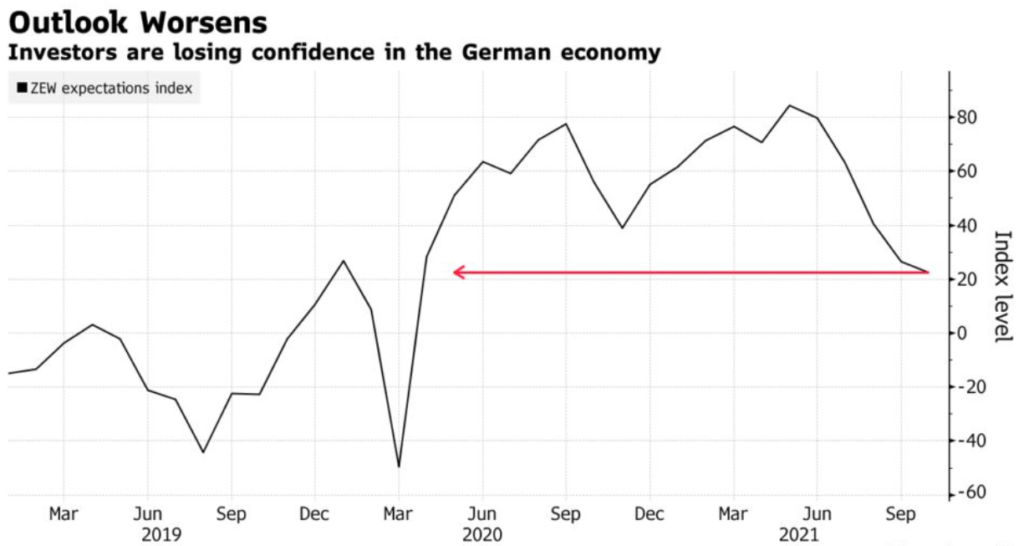 A prolonged shortage of supplies, a lack of transportation capacity, and a sharp rise in energy costs are all threatening global economic recovery, particularly in manufacturing-heavy countries like Germany. Domestic growth estimates have already been revised down by some of the country's biggest economic think tanks, with the Ifo and DIW institutes both predicting that the recovery will be delayed until 2022.

The drop in sentiment this month is primarily due to the persistent supply constraints for raw materials and intermediate products, said ZEW President Achim Wambach. "Profits are expected to fall, especially in export-oriented sectors like vehicle manufacturing, chemicals, and pharmaceuticals," according to financial market specialists.

Businesses have also reported a drop in optimism, and recent surveys indicate that the weakness is seeping into services as consumers become wary of rapidly increasing prices.

In September, Germany's inflation rate hit its highest level in nearly three decades. Officials from the ECB have claimed that the price increase is primarily transitory, but they have recently begun to warn that pricing pressures may become more persistent.