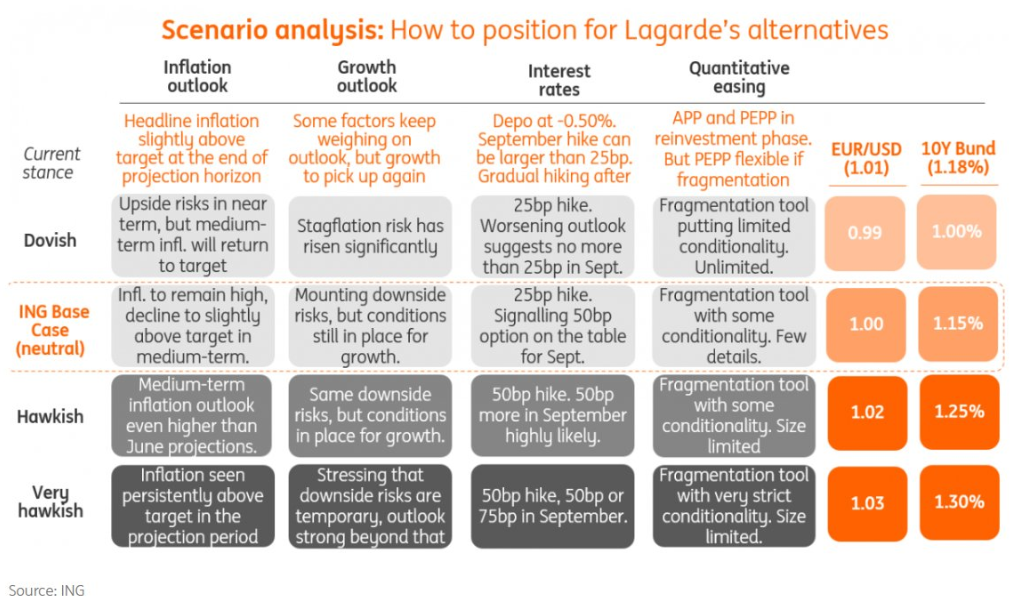 A 50 bp hike would put an end to an eight-year experiment with negative rates and mark the first increase by the central bank in more than ten years. In June 2000, the ECB last increased interest rates by 50 basis points. In my opinion, the ECB should have raised rates by 50 basis points a long time ago, according to Frederik Ducrozet, head of macroeconomic analysis at Pictet Wealth Management. The timing of the decision and the manner in which it was presented, not the choice itself, would be an issue.

ECB to signal the end of an era this week; Expect 25bp but more is not unthinkable. Lagarde will likely leave the door open for more than 50bp in September.

We expect the ECB to kick off its rate hike cycle at its July monetary policy meeting next week with a 25 basis-points hike to 0.25%.

The ECB's forward guidance from its June meeting indicated that it intends to raise policy rates in July and again in September, but potentially by a larger increment at the latter meeting. We view the possibility of a 50 bps rate increase in September as more likely than not; however, we think it is unlikely the ECB will deliver multiple 50 bps rate hikes. As such, we forecast a 25 bps hike in July, a 50 bps hike in September, and a 25 bps hike in December, bringing the policy rate to +0.50% by the end of 2022. We then expect the ECB to deliver its last rate hike of the cycle by Q1 next year, finishing with a Deposit Rate of +0.75%.