According to people acquainted with the matter, the European Central Bank's revised predictions show inflation falling to be below the 2% objective in both 2023 and 2024.

Barclays' View:
Between April and September 2022, Barclays anticipates the ECB to add a monthly €30 billion to the present €20 billion volume of the asset purchase program, meaning an extra purchase envelope of eur180 billion.
Economists at the bank also expect the European Central Bank to complete its current emergency buy program in March of next year, as planned. According to Barclays, PEPP purchases will drop marginally to eur60 billion per month in 1Q 2022 from eur70 billion per month in 4Q 2021.

According to Barclays, the European Central Bank's first interest rate hike could occur in early 2024, with a 25 basis point increase. It anticipates the possibility of a rate hike a quarter earlier, or possibly in mid-2023, depending on inflationary trends.
"If inflation does not fall below 1.5% in 4Q 2022-1Q 2023, as we and the ECB now expect, but converges to 2% from above," according to Barclays, "the lift-off date would likely be pushed forward to 1H 2023."

ING's View:
At its December meeting, the European Central Bank is likely to decide on how to transition away from quantitative easing. The answer is probably by announcing more QE, temporarily. We argue it should retain as much optionality as possible. This is near-term dovish for rates, but paves the way to tightening. 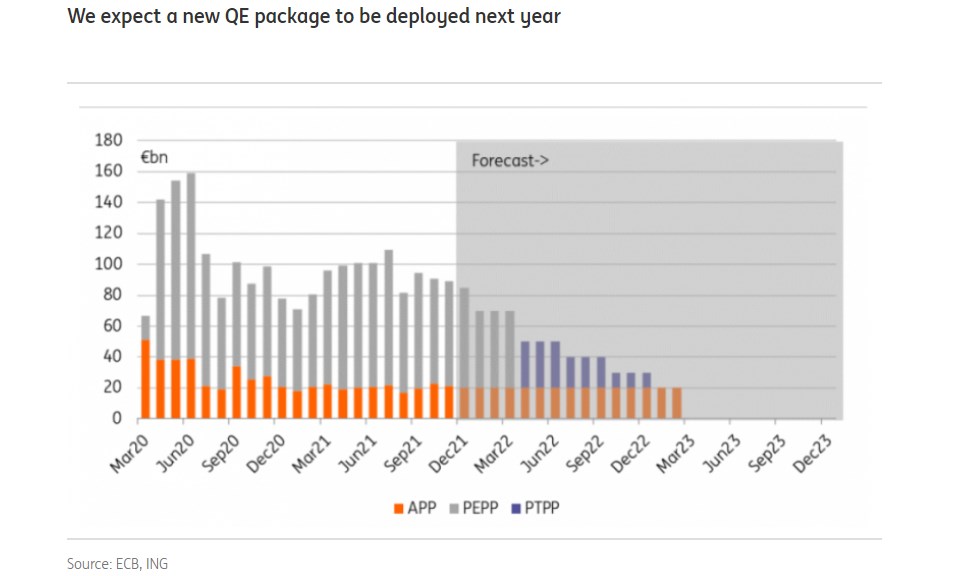