Wells Fargo
We expect the FOMC to maintain the current Fed Funds target Range of 0.0%-0.25%. However, considering that the labor market continues to tighten and inflation pressures continue to mount, we now expect FOMC officials to announce that it plans to taper asset purchases at a faster pace over coming months. Specifically, we look for the FOMC to reduce Treasury and mortgage-backed securities purchases at a pace of $15 billion and $7.5 billion per month, respectively, which would lead to purchases wrapping up in April 2022.

While Fed officials continue to emphasize that reducing its asset purchases and lifting the Federal Funds target range are two separate endeavours, bringing the bond-buying program to an end sooner will give the FOMC greater optionality in the year ahead. The FOMC will also release its Summary of Economic Projections. It would not surprise us to see a hawkish shift in the “dot plot,” with indications of at least two 25-bp rate hikes in 2022, followed by an additional three hikes in both 2023 and 2024. That would put the median estimate for the Fed Funds target range at the end of 2024 at 2.00%-2.25%.

Goldman Sachs
If the Fed does what is expected and accelerates the pace of asset purchases, it will face the question of what to do with its $8.7 trillion balance sheet even sooner, once it has completed the bond purchases that have caused central-bank holdings to rise sharply. The Fed will wait a while before allowing holdings to contract.

"We expect the fourth rate hike to occur in the first half of 2023, and our best guess for now is that runoff will begin around that time," the bank says. According to analysts, "research on balance sheet policy suggests that the impact of runoff on interest rates, broader financial conditions, growth, and inflation should be modest, much less than that of the rate hikes we expect."

Morgan Stanley
The Federal Reserve is likely to quicken the pace at which it reduces its bond-buying program. Some analysts believe that a speedier reduction will increase stock market volatility. "If they follow that route, we believe it will leave an impact on asset values," Morgan Stanley analysts said. "Our guess is that growth will slow at a time when it is already slowing, increasing the chances that our bear case will play out."

According to Morgan Stanley, the Fed would be tapering its bond-buying program twice as quickly as it did in 2014, when it took the central bank ten months to wind down its operation. Furthermore, when the Fed last tapered, economic growth was increasing, whereas it is now expected to decelerate.

Previous FOMC
Asset Purchases
The Fed announced that they have decided substantial further progress test for tapering asset purchases has been met. They are to reduce Treasury purchases by $10 billion and mortgage-backed securities purchases by $5 billion in the months of November and December. The NY Fed markets desk is to adjust open market purchases of treasuries to $70 bln/month of treasuries, $35 bln/month of MBS starting in mid-November.
Furthermore, they add that comparable decreases in buying pace are likely reasonable each month, but we are willing to adapt if necessary, and state that similar decreases in buying speed are likely appropriate each month, but still are willing to adapt.

Recovery
The Fed reiterated that the increase of COVID-19 cases this summer hampered the recovery of industries harmed by the pandemic, and the path of the economy is still determined by the path of the virus. Nonetheless, economic activity and employment have continued to improve.

Inflation
The recent increase in inflation is largely transitory, according to the Fed statement.
Supply and demand imbalances caused by the pandemic have contributed to significant price rises in several sectors.

Recent Comment From Powell:
Fed's Powell repeats: we need to move away from the term transitory. The term "transitory" refers to not leaving a permanent mark on prices. 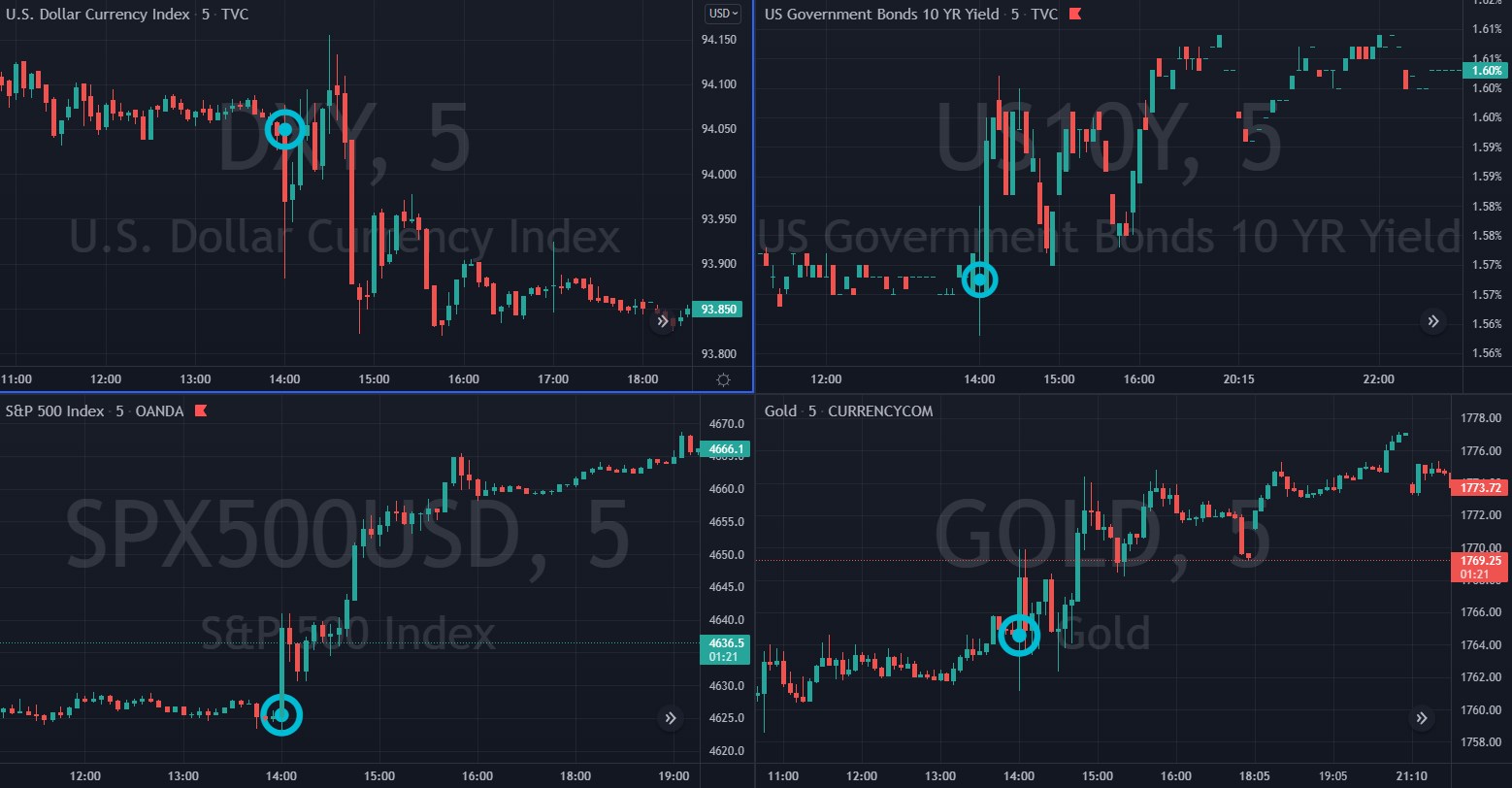