On Wednesday, May 4th at 2 PM ET, the FOMC is set to release their statement, and announce the US interest rate decision, median forecasts expect a 50 bps hike to 1%. Here are some views on what to expect:

A 50bp interest rate hike from the Federal Reserve is widely expected given recent commentary from officials and the fact inflation is well above target and unemployment is just 3.6%. The negative 1Q GDP print will be shrugged off with quantitative tightening also announced. We continue to see the risks skewed toward swifter, more aggressive action. 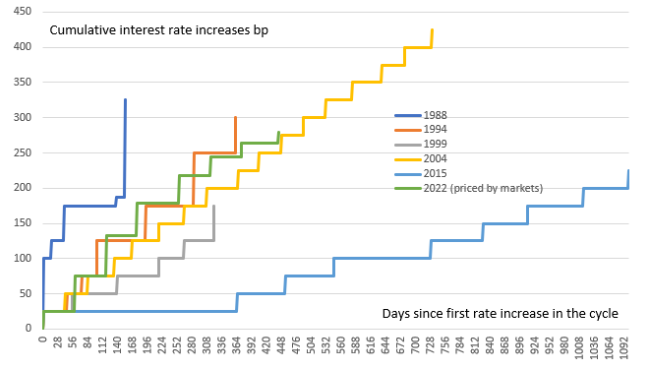 "We will also be looking for the Fed to formally announce quantitative tightening on Wednesday. The minutes to the March FOMC meeting showed “all participants” felt the need to announce the “commencement of balance sheet runoff at a coming meeting”."

“The markets are confused. the uncertainty factor is some of the highest we’ve seen in the course of the last number of years,”

"Could the FOMC surprise markets with a more aggressive 75 bps hike? Perhaps, but it is not likely, in our view. St. Louis Fed President James Bullard, who is one of the most hawkish members of the FOMC, said recently that he is open to the possibility of a 75 bps hike, but it is not his base case."

Expects the Federal Reserve to raise interest rates by 75 basis points in both June and July, higher than an earlier Nomura projection of two 50 basis point increases.

"Hikes would take the Fed funds rate to 2.25-2.50% by July, around federal open market committee estimates of neutral."

Fed's Chairman Powell stated in his comments on April 21st

"We are going to be raising rates, getting expeditiously to more neutral, then to a tight policy if appropriate." and that "for the May meeting, 50 basis points will be on the table." citing that he sees it as appropriate to move "a little more quickly on interest rates."

I think it will take a couple of years to get inflation down to 2%. Once rates are at neutral we could pause, or raise further, depending on the data. The shock of a 75 bps rate hike is not needed. Supports 50 bps hike in May

Fed's Brainard indicated that the last period of balance sheet reduction was in 2017-19. During this time, the Fed reduced it by about $50 billion per month. According to the minutes of the last FOMC meeting, which was held on March 15-16, 2022, members generally favored setting the initial rate of balance sheet reduction at roughly double that rate, or about $95 billion per month.

On the morning of May 2, 2022, the CME FedWatch Tool anticipated this pattern of future rate hikes coming out of the remaining FOMC meetings currently scheduled for 2022:

This saw the DXY strengthen before paring losses, Gold strengthened, the S&P 500, and Bitcoin weakened.