On Friday, October 7th at 8:30 AM ET, the BLS is set to release the latest US Nonfarm Payrolls and Unemployment Rate numbers for the month of September, here are some views on what to expect:

Wells Fargo
Nonfarm Payrolls Forecast: 275K
Unemployment Rate Forecast: 3.7%
"The U.S. labor market continues to be one of the strongest parts of the global economy. Nonfarm payrolls rose by 315K last month with industry gains once again widespread. This pace of job growth marks a downshift from the 402K average recorded in the prior three months, but it is nonetheless a robust gain in its own right. For context, nonfarm payrolls increased by an average of 167K per month in the 2010s."
"In the near term, we look for another solid 275K increase in nonfarm payrolls in next week's employment report. Another sizable increase in labor force participation would be a welcome development for Fed officials as they attempt the high-wire act of bringing labor supply and demand into a healthy balance." 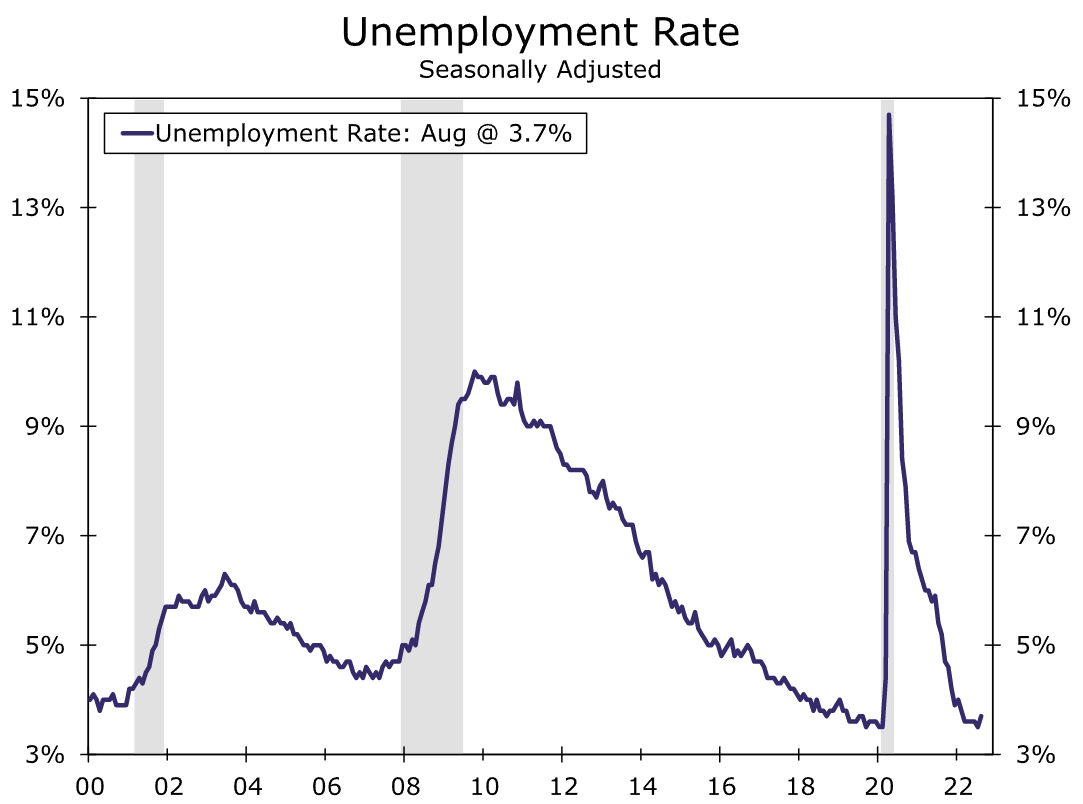 Source: US Department of Labor and Wells Fargo Economics.

JPMorgan
NFP Forecast: 300K | Dr. David Kelly: 389K
Unemployment Rate Forecast: 3.6%
Dr. David Kelly:
"Despite very weak real GDP growth, the huge excess demand for labor which emerged as pandemic effects subsided, should keep payroll job growth strong for a while and limit any immediate increase in the unemployment rate. September employment numbers should shed fresh light on the speed with which labor market imbalances are fading. However, the most likely path for the labor market is one of delayed rather than canceled reactions."

ING
Nonfarm Payrolls Forecast: 220K
Unemployment Rate Forecast: 3.7%
"The sharp fall in JOLTS job openings yesterday could be viewed as a signal that the labor market is indeed cooling, which would suggest the Fed is winning its battle against inflation."

"If so, stocks and bonds should like that. So bad macro news may be good news for financial assets."

This caused overall weakness in the US dollar, and upside movement in the S&P 500, as well as WTI Crude oil.
Yields on the US 10-year bonds whipsawed but ultimately saw some downside movement (5min chart pictured).