On Friday the 5th of August at 8:30 AM ET, the Bureau of Labor Statistics is set to release the US Nonfarm Payrolls and Unemployment Rate report for July 2022, here are some views on what to expect: Wells Fargo
Nonfarm payrolls put up another robust gain in June, increasing by 372K, and employment growth was again broad-based across industries. However, beneath the surface, there are some tentative signs that the labor market is cooling
With employment levels finally catching up with demand, we look for hiring to slow steadily over the second half of the year. As we look to 2023, we think an outright decline in employment will commence in late Q1/early Q2 as the economy slips into a mild recession. 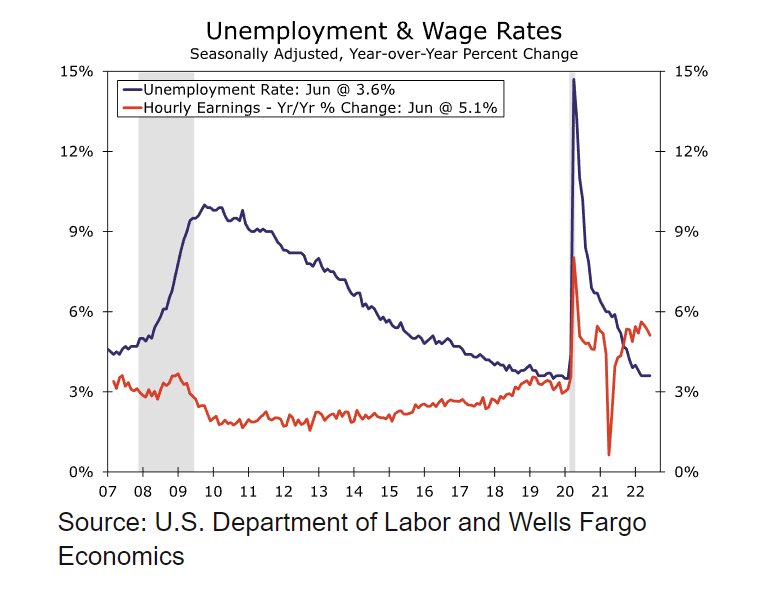 Fedspeak & Key Comments
(3rd August) Fed's Daly: I expect the jobs market will slow, and unemployment will rise a little. A slight increase in the unemployment rate is a tolerable piece for me to bring inflation down.

(3rd August) Fed's Kashkari: There will eventually be a tradeoff between employment and inflation.

(2nd August) Fed's Mester: I believe unemployment will rise as we progress through this cycle, but we need to have that happen to make sure we get back to price stability.

(2nd August) Fed's Evans: With economic growth near trend, I see the unemployment rate remaining below 4.5%.

(2nd August) Fed's Daly: I do not anticipate a substantial increase in the unemployment rate.

(July 28th) US Treasury Secretary Yellen: We could see some slight relaxation of labor market pressures while still seeing a labor market that is running at full employment. Most estimates of the natural rate of employment are less than 5%.

"Job growth has been strong, and the unemployment rate has stayed low. In my opinion, the natural rate of unemployment is higher."

(July 26th) IMF Chief Economist Gourinchas: Fed tightening may cause the unemployment rate in the United States to begin climbing in 2023.

JPMorgan
Dr. David Kelly
"While this excess demand for labor is impressive, it may be a little more fragile than an excess demand that reflected the current booming demand for goods and services. There are likely many business owners and corporate executives who, over the last few months, have transitioned from a singular concern about a lack of qualified workers to a realization that demand has softened and that they now no longer need, and cannot afford to hire, extra staff."

Blackrock
MD & CFA Rosenberg, July 8th.
"While we are seeing some slowing in payroll gains, it’s not enough for the fed and the lack of people coming back into the labor force is a real problem on the wage front."

This caused strength in the dollar and downside movement in the S&P 500 & Gold.

At this point, total nonfarm employment was down by 524,000, or 0.3%, from its pre-pandemic level in February
2020. Private-sector employment had recovered the net job losses due to the pandemic and was 140,000
higher than in February 2020, while government employment was 664,000 lower.