The Symmetrical Triangle as a price pattern is fairly common as it presents frequently in all markets, time frames, & price ranges and tends to provide a great reward-to-risk ratio when traded with a clear trend bias. Their versatility has made Symmetrical Triangles available as either a bullish or bearish trend continuation pattern or a reversal pattern depending on the trading environment in the background.

Symmetrical Triangles vary in their duration & are often quite large which diminishes their momentum & represents indecision. They will have at least two swing highs and two swing lows in price. Traders should be prepared to adjust the trendlines as needed with additional swings. Volume usually diminishes as the pattern develops because traders become more & more unsure as to the market’s future direction. Symmetrical Triangles are considered neutral & often appear aimless in direction as the range-bound price action is balanced between buyers & sellers exhibiting similar strength. Eventually prices squeeze to an Apex. The closer to the apex price gets the odds for a break of the immediate price range become more likely.

Traders can look to trade the Symmetrical Triangle in numerous similar methods regardless of market environment but with several nuances can ‘stack the deck’ which increases the risk-to-reward ratio for profits. One of the best Symmetrical Triangle performers statistically is the bearish continuation pattern seen in a downtrend.

1) Background: A Strong impulsive, thrusting action with a surge in volume & price establishes a clear picture of the controlling bearish trend direction. In our symmetrical triangle price pattern it is represented visually by a Pole. Deeper and more drama the better as the Pole is the Key to recognizing the potential for the continuation of the pattern. The Pole represents trend direction as well as its strength & often this pattern is initiated as a new breakdown in price from an established area & sellers are in control.

2) The second phase is a pause for consolidation of the action both in volume & price and is represented by the symmetrical triangle. As traders we like to see this phase very short in duration with only 2 or 3 swings while our price action is range bound maintaining the higher lows & lower highs shape and the volume is ‘resting’. The best breakouts occur at 50-75% of the triangle completion. Caution if the breakout is delayed until prices crowd into the apex as it is an indication of ‘balance’ or indecision between buyers & sellers.

3) The pattern confirms as a bearish continuation pattern if the action creates a new bearish breakdown with a surge again from the bears in both volume & price. The immediate lower support outlined by the symmetrical triangle is the area traders look to see confirm the breakdown. Typically the action will mimic the volatility & energy experienced with the Pole creation. Since the symmetrical triangle represents neutrality it is highly recommended to pay close attention to the volume after the breakdown as an aid in recognizing further potential for the pattern. With large patterns where the momentum has been somewhat ‘dampened’, re-tests of the apex &/or breakdown price are common before the trend can continue.

Options for Trading the Symmetrical Triangle as a bearish continuation pattern:

Aggressive traders will enter short trades right around the upper resistance trendline once sufficient resistance has confirmed. The concept is that the trend is on your side and the bears are maintaining a decreasing ‘wall of resistance’ while squeezing prices as evidenced by the slope of the immediate support line of the triangle.

This is a very accurate trade that usually has a great risk:reward ratio. Stop placement can be fairly tight right above resistance & can be adjusted downward accordingly. Note there is a ‘mid-line’ created using the apex as the measurement & traders can gauge success of the immediate swing based on this incremental value. When price approaches the advancing support line you should gauge the momentum: if you see that the momentum is strong stick to the position. However, if you see that support prevails, close the trade & take your profits to maximize the reward.

Conservative traders will enter a trade once the lower ascending support line has been broken &/or the new breakdown has confirmed. 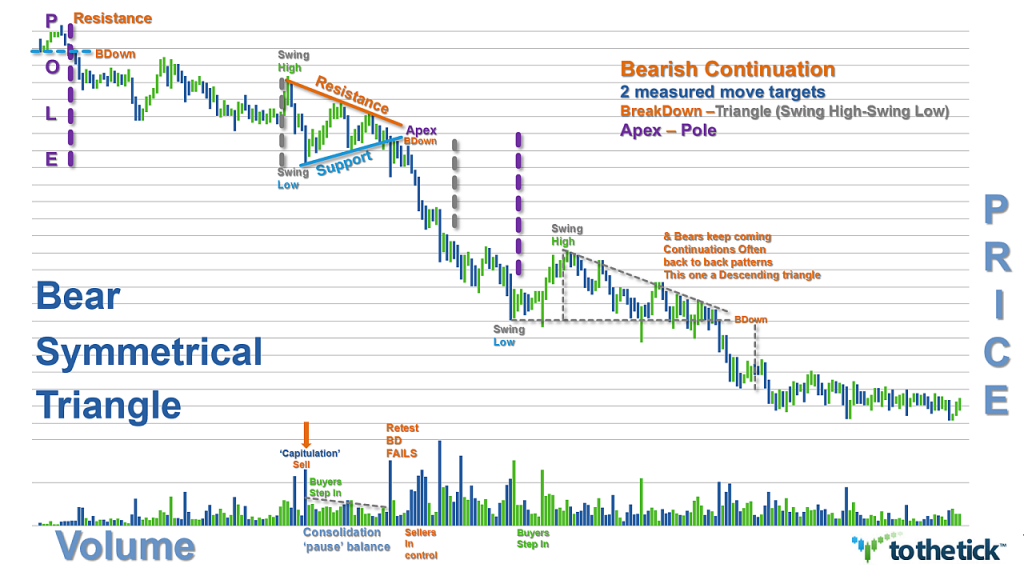 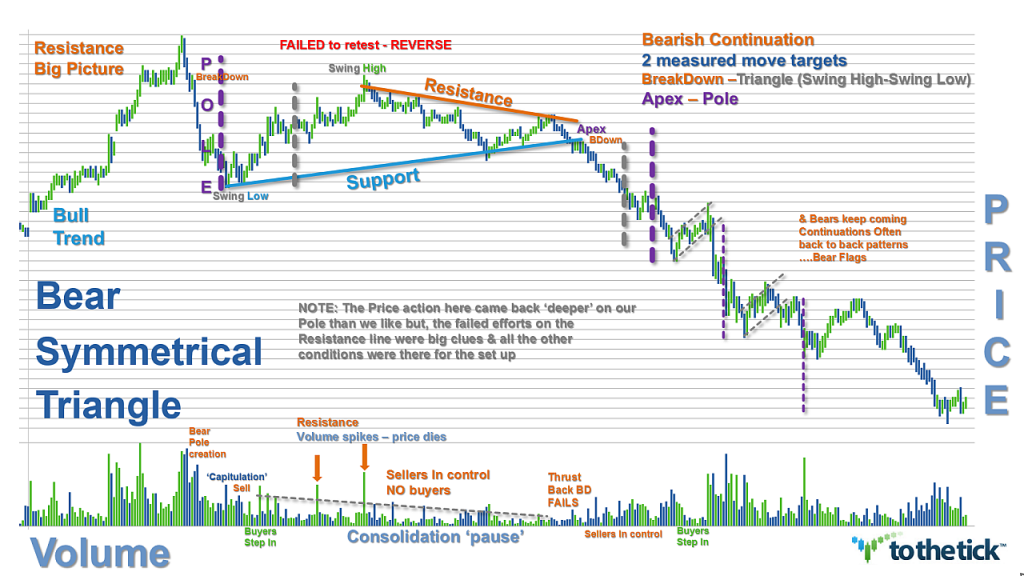