The Neutral Rectangle as a price pattern can be seen quite often as it presents frequently in all markets, time frames, & price ranges. They are one of the few patterns that can be considered a bullish or bearish trend continuation pattern, a reversal pattern, and even as a sideways ‘neutral’ pattern that may last quite some time depending on the trading environment.

Visually Neutral Rectangles are characterized by parallel or near-parallel trendlines drawn representing equal lows & equal highs in price. The pattern highlights the current indecision and doubt from traders as the price action is in ‘balance’ between buyers & sellers. The forces of supply & demand are basically equal. The horizontal upper trendline will experience multiple efforts and acts as price resistance. The horizontal lower trendline will also experience multiple efforts and it acts as price support. Typically Neutral Rectangles are horizontal or flat but they can also present with a slight slant upward/downward against a prevailing trend.

Neutral Rectangles vary quite a lot in their duration & the time involved in creating the pattern is key to helping the trader determine whether to risk taking a trade with such a balanced scenario. Often their sheer size will neutralize whatever momentum existed when the pattern first started to form. To be considered viable they must have a minimum of two swing highs and two swing lows in price to create the basic pattern. There is no limit or restriction on how large or how long the pattern may take. Traders should be prepared to adjust the trendlines as needed with additional swings. Volume usually diminishes as the pattern develops as buyers & sellers both become more indecisive with what seems to be ‘aimless’ range-bound price action.

Traders can look to trade the Neutral Rectangle with three basic methods & regardless of traders’ choice for entries, stop placement should be fairly tight with placement directly under support and directly above resistance.

Traders looking for a bullish continuation pattern note it has 3 phases:

1) Background: A Strong impulsive, thrusting action with a surge in volume & price establishes a clear picture of the controlling bullish trend direction. In our neutral rectangle price pattern it is represented visually by a Pole. Higher and more drama the better as the Pole is the Key to recognizing the potential for the continuation of the pattern. The Pole represents trend direction as well as its strength & often this pattern is initiated as a new breakout in price from an established area & buyers are in control.

2) The second phase is a pause for consolidation of the action both in volume & price and is represented by the neutral rectangle. As traders we like to see this phase very short in duration with only 2 or 3 swings while our price action is range bound maintaining the equal lows & equal highs parallel or near-parallel shape and the volume is ‘resting’.

3) The pattern confirms as a bullish continuation pattern if the action creates a new bullish breakout with a surge again from the bulls in both volume & price. The immediate upper resistance outlined by the neutral rectangle is the area traders look to see confirm the breakout. Typically the action will mimic the volatility & energy experienced with the Pole creation. Since the neutral rectangle represents balance & neutrality it is highly recommended to pay close attention to the volume after the breakout as an aid in recognizing further potential for the pattern. With large patterns where the momentum has been somewhat ‘dampened’, re-tests of the breakout price are common before the trend can continue.

Options for Trading the Neutral Rectangle as a bullish continuation pattern:

Aggressive traders will enter trades right around the support trendline once sufficient support has confirmed. The concept is that the trend is on your side and the bulls are maintaining a higher level of support above the support level in the background.

Stop placement can be fairly tight right under support & can be adjusted upward accordingly.

Note the middle price area of the neutral rectangle is a ‘muddy trench’ in this tug of war between buyers & sellers. It will offer an immediate incremental target after an entry. When price approaches the upper resistance  line you should gauge the momentum: if you see that the momentum is strong stick to the position. However, if you see that resistance prevails, close the trade & take your profits to maximize the reward.

The aggressive trading method can highly increase the profit potential of any rectangle, as you can trade the same pattern several times & profit from the ranging swing movements inside the pattern. However, remember that as a trend continuation pattern traders want this consolidation rectangle formation to be relatively brief. Two or 3 swings may turn into more with this rectangle so traders need to be prepared to be patient & continue to evaluate the risk:reward parameters to fit the action.

Measured Move Targets based on structure of Pole & the Bull Neutral Rectangle: 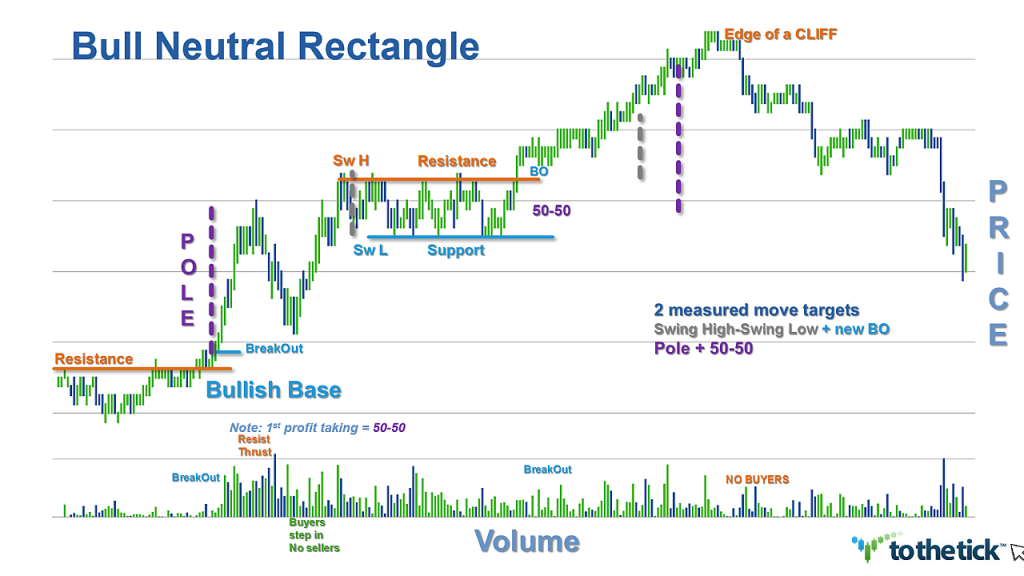